In version 4.6 of Profound UI we introduce our new mobile client that makes it dead simple to create powerful mobile apps. This feature is designed to make it easy for RPG programmers to write ILE RPG programs that run on IBM i, but send their screen output so that they look and feel like native mobile apps running on an Apple iOS or Android device.

Profound UI has supported mobile devices for quite some time now. Originally, we supported running both our Genie module and our Rich Display module (including converted displays) in the web browser on a mobile device. This worked nicely, just as it does in a PC browser, but has two distinct disadvantages: It acts like a web page rather than an “app”, and it does not permit access to all of the device’s hardware.

To improve things, we added support for the PhoneGap framework that lets you generate your own apps that display our rich displays. With PhoneGap, the sky is the limit. You can build powerful apps with your own name and logo, incorporate both client-side and server-side logic, and package them up as an app that can be loaded into the Apple App Store or Google Play. We even provide templates for PhoneGap so that you can generate a basic app simply by changing the server address, library and RPG program name in the template.

The PhoneGap environment works great, however, customers have told us loud and clear that creating apps for iOS devices with PhoneGap isn’t as easy as they want it to be. For one thing, Apple requires that iOS apps be created on a Mac by a registered Apple Developer. Most of our customers are Windows users, plus, being an Apple developer requires you to pay Apple for a developer certificate, which is an extra expense that our customers don’t need. Furthermore, once you’ve created your app, it can be difficult to get Apple to allow it to be published in their App Store. Apple is notoriously choosy about what is (or isn’t) allowed in the App Store.

To solve these problems, we’ve come up with a solution: The Profound UI mobile client. This is an app created by Profound Logic and made available for free in the Apple App Store and Google Play. When you load and run it on your device, you are able to configure it with one or more server addresses. When you click on a given server, it connects to that server and runs a Rich Display program that is configured on the server.

This way, you can create any RPG-driven mobile app you like on the server side, and simply run it with our free app. There’s no longer a need to build the mobile client, become a registered developer, or try to publish anything through the app store. Since your work is done in RPG with our Visual Designer (which runs in a web browser) you can use any platform for your workstation: Windows, Mac, Linux, it’s your choice!

Here are the steps needed to create a mobile app using the Profound UI client. Version 4.6.0 of Profound UI is required, but we recommend running the latest version. Each of the following steps will be described in greater detail, below.

Step 1: Develop a Rich Display Program to be Run from the Mobile Client

Use the Visual Designer to create a rich display program (or convert green-screen DDS to a rich display) the same way for mobile devices that you would for desktop PCs. We recommend that you give some thought to using larger fonts and buttons on a mobile device so that it's easy to read the text or touch the buttons on small screens.

Step 2: Use the Visual Designer to Configure Profound UI Mobile

This is done on the Launch menu of the Visual Designer. Click Launch and then Configure Profound UI Mobile.

The Visual Designer will present a screen where you can tell the Profound UI server which Rich Display program you’d like to run when the mobile client connects:

The settings you type here should indicate the library and name of a program that will display a Profound UI rich display. If you want the user to sign on to the system prior to using your app, you should also check the “Require Sign-On” box.

The settings will be saved into a physical file named PUIMOBP in your Profound UI installation library which is named PROFOUNDUI by default. Storing the settings on the server rather than the mobile device helps keep things secure. Since the mobile client can never choose the program to run, you don’t need to be concerned with the user selecting any other program aside from the one you configure.

The Profound UI mobile client is a free app available in either Google Play or the Apple App Store. The easiest way to find it is to search the app store for “Profound UI” (which is the name of the app) and then you can install it exactly the same way that you would install any other mobile app.

Step 4: Point the Profound UI Mobile Client at Your IBM i Server

Once the Profound UI app is installed, run it and you will be presented with a screen like this one: 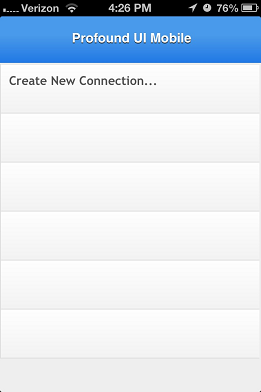 To create a connection to your IBM i server, click the “Create New Connection” area of the screen. You will be presented with a screen that looks like this: 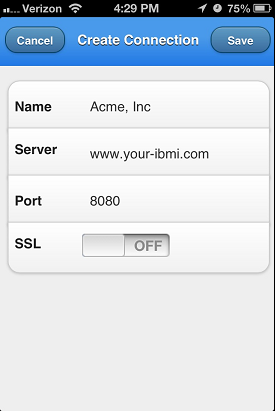 Here you type the details of the IBM i server you’d like the user to connect to. The “Name” field will be what the user sees on the connection screen, so choose a name that your user will find intuitive for the server. The “Server” field may be the domain name or IP address needed to connect to your IBM i server. The Port number should point to the Profound UI HTTP instance that contains your mobile app, and SSL may be enabled as well if you have it enabled on your server.

Once you click “Save” these settings will be saved to the mobile device, and presented to the user on the initial screen when they start the Profound UI app. When they click on the server name, it’ll connect and display the RPG program that you created in Step 1.