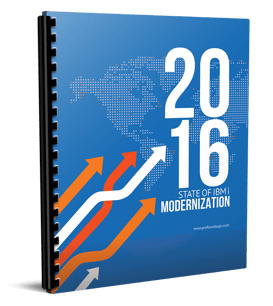 One of the greatest concerns respondents had involved the perception of IBM i in their enterprise. While technical users agreed that the platform is much more stable and reliable compared to other options (such as Oracle or Microsoft platforms), the business-facing aspects of the platform – AKA application interfaces – led business users to believe the platform they were using was much older than it actually was. But the roots of IBM i run deep in most businesses that use it, and involve applications and code that may have been in use for a decade or more. Because of this, development understands that extreme modernization approaches, such as platform migration or “re-architecting”, based on user perceptions can be incredibly disruptive to the business.

This migration approach may initially appear more attractive to business management because they are unaware of the alternatives. According to our findings, management doesn't seem to be aware of neither the regular technology refreshes to keep the platform ready for the challenges of today’s enterprises, or that the IBM i has a strong future as outlined in a recent roadmap released by IBM i Chief Architect Steve Will. The simple use of green screen applications give them the impression that the platform is much older than it really is, or that development in RPG isn’t as modern as using a language like .NET, when in reality the opposite is true.

The challenge for developers is to communicate this value to management – which is where tools like this survey, combined with studies like the one ITG released in late 2014 (“Management Report: IBM i on Power Systems for Enterprise Businesses”), and the IBM i Roadmap through 2026, will be extremely helpful for making the case for IBM i. Instead of uprooting their IBM i and moving to what management believes is a “newer” platform – which will inevitably result in significant costs, labor to re-write legacy applications, and business disruptions – it is much more effective and just as rewarding to take an Enterprise Modernization approach. This means keeping the roots of the system intact while modernizing only the areas that need attention: namely, green screen interfaces, older RPG code, non-relational databases, and outdated development tools and approaches. 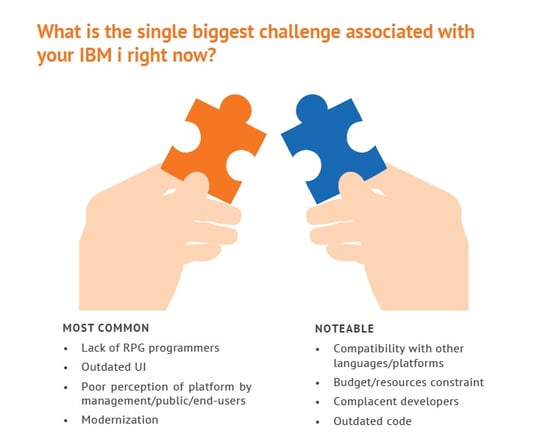 The other major concern for both development and management is the potential loss of RPG developers in the coming years. Hiring new developers to manage applications that have seen decades of development in a language that younger developers may not be familiar with can seem like a daunting task. Yet another reason for taking an Enterprise Modernization approach is that it will create a development environment that is familiar and intuitive to younger developers, even if they aren’t initially familiar with RPG code. Modern free-format RPG code is similar in syntax to newer languages, like PHP. Web applications are easier to develop and maintain. Relational databases that use SQL and DDL instead of DDS support data modeling and modern automation tools.  Integrating DevOps into current development practices increases production, reduces errors, and fosters a culture of collaboration between development and IT. This Enterprise approach makes it easy to pass the torch to a new generation of developers, while keeping all of the benefits of your current IBM i platform in place.

So what is the overall state of IBM i modernization? You’ll have to read the survey results to see the whole picture! Better yet, share with your team, conduct your own internal findings, and discover all of the benefits that modern GUIs, code, databases, and development processes can have in your enterprise.