Since 1999, Profound Logic has given business around the world the tools to modernize their IBM i  (AS/400, iSeries) 5250 green screens to modern, Web 2.0 interfaces.

This week, our focus is Ecclesia Holding Company. Read more....

Four years ago, Profound began working with Ecclesia Holding, an insurance broker in Germany with 1350 employees. They were using 5250 green screens, and needed a fast and easy way to modernize their applications using their existing RPG code and business logic. That's where Profound Logic came in.

After meeting with the Ecclesia's development team, they were presently surprised at how easy transitioning to modern application interfaces would be using Profound UI. As one developer said, "Getting started with Profound was absolutely easy! After a few hours of training, most of our developers were able to write productive programs with Profound UI. I think this is because Profound is made for developers."

"Getting started with Profound was absolutely easy! After a few hours of training, most of our developers were able to write productive programs with Profound UI. I think this is because Profound is made for developers." 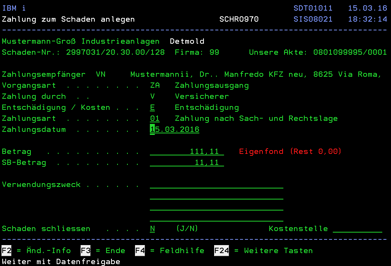 Another benefit to using Profound UI is the ability to minimize the amount of screens needed for an application. Due to the limited size of green-screens, many of Ecclesia's applications relied on multiple screens. Profound UI enabled them to create applications interfaces capable of including all necessary information on a single screen.

Along with custom widgets and condensed screens, Ecclesia created new dialogue programs that are written completely with Profound UI and were able to support long field names which made their programs much more readable and eliminates the need for indicators. All attributes of fields now can be set by descriptive names!

Their developers are convinced that using Profound UI is easier and faster than using their old green-screens,  New features that make their users more productive include sortable grids with export and find and filter options.

"We can say that our decision to use Profound is a success story. Our programs look much better than green screens and they are a lot easier to use!"