Over the years Profound Logic has been helping companies maximize the use of their IBM i (AS/400) systems by helping them to modernize their IBM i 5250 green screens to a more user friendly Web 2.0 interface. We have been fortunate enough to help many great companies modernize their data without having to completely rewrite their system or leave the IBM i altogether.

In this series of blogs we want to highlight some of those customers who we have helped throughout the years. Through this blog series you will get to see before and after pictures of their modernization efforts, as well as hear from the customers themselves.

This week we are focusing on Colorado Lottery, and the help we were able to help them with modernizing their IBM i green screen application interfaces.

The software developers for the Colorado Lottery were charged with modernizing their IBM i green-screen interfaces and providing applications with Web 2.0 interfaces for their user base. They reviewed a number of different products before they decided to work with Profound Logic and our flagship product, Profound UI.

Several of their IBM i developers were given the opportunity to preview Profound UI and speak with our team at the annual COMMON User Conference. After speaking with our team and previewing the product, the developers quickly realized that Profound UI was the most developer-friendly and most robust tool among all the IBM i modernization products that they evaluated. Once they purchased Profound UI, a team was sent out for a week-long, on-site IBM i modernization training session to help begin their journey with Profound UI. 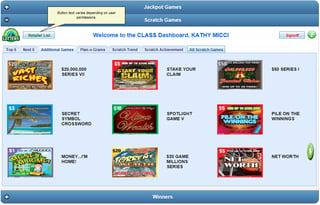 The Colorado Lottery sales team needed a software solution to serve their clients and provide real-time reports while working away from their offices. They had tried different "mobile" IBM i solutions, but none of them provided the interface and functionality their sales team needed.

Using Profound UI, the developer team at Colorado Lottery created an application that fulfilled the sales team's entire "wish list." They began working on the iPad Sales Dashboard in February and completed, tested, and deployed it in the field by June of that same year!

Learn how to Make Modern Applications That You Will Love With IBM i RPG and Node.js with Profound UI and Profound.js! This live webinar will be hosted by Alex Roytman and Liam Allan | February 14th at 10:30am PT.