Since 1999, Profound Logic has given business around the world the tools to modernize and develop new web and mobile applications for IBM i  (AS/400, iSeries).

This week, our focus is APLUS Informatique. Read more....

For years, APLUS had looked for a way to remove themselves from green screens altogether. Unfortunately, they couldn't find a solution that enabled them to create modern web applications without having to rebuild their existing applications from scratch. Their continued use of green screens prevented them from adding new customers to their portfolio, and was difficult for their existing customers to use.

"No one wants green screens anymore. Today, you can't sign a new customer if you are still showing green screens."

Fortunately, APLUS discovered Profound Logic in 2014, and immediately recognized that Profound UI offered exactly what they had been looking for. Once Profound UI was introduced to the entire team at APLUS, the company began modernizing their software immediately. As a transitional step, APLUS began with Profound UI's Genie, which allows quick deployment of green screens into a web browser using UI/UX best practices. This enabled them to modernize the application's UI end while they worked on modernizing the source code.

After completing their Genie deployment, APLUS began the process of re-engineering their green screens into modern Web applications. Using the Profound UI Visual Designer, they were able to create detailed maps, integrated images, web based grids and columns, interactive menus, and much more from their own data. 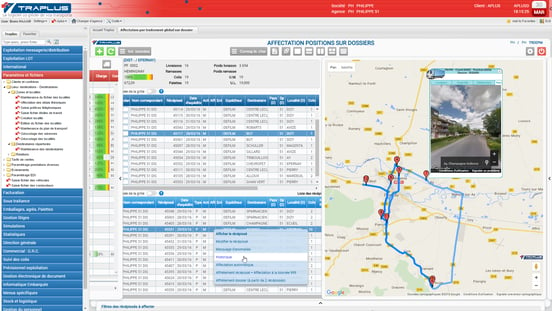 "Since partnering with Profound Logic, our existing customers are switching to the web version of our software and we have signed several new customers . This would not have happened if we were still using exclusively green screens," says Hajjar.

Profound UI's suite of tools seamlessly worked with their existing IBM i platform, which prevented APLUS from having to invest in unnecessary middle-ware or Windows servers. This gave them the speed and accuracy they were looking for in a modernization tool. As a result they now have a robust and modern system for their customers to interact with on a daily basis. Well done APLUS!

"Our existing customers are switching to the web version of our software and we have signed several new customers sense partnering with Profound Logic. This would not have happened if we were still using exclusively green screens!"