COMMON 2014 is a Wrap! Profound Highlights from the Event 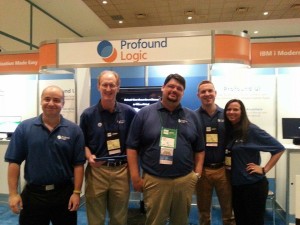 The Profound Logic team, ready to take IBM i modernization to the people!

The 2014 COMMON Annual Conference and Exposition in Orlando, FL has drawn to a close, and the message at this year's event was clear - IBM i Application Modernization is no longer a 'nice to have', but a 'must have' for today's businesses!

Profound Logic was excited to take part in this discussion. In addition to our presence in the Expo hall where Profound UI demonstrations were in high demand, we were heavily invested in the content of this year's conference. Scott Klement was in top form while demonstrating how flexible, modern and frankly amazing the RPG language is in sessions that included "Working with JSON in RPG", "A Pattern for Reusable RPG Code" and "RPG User Defined Functions & Table Functions". Brian May shared his insight on the topics of modern data structures and application development, and we were proud to see his contributions to the IBM Application Modernization Redbook recognized by the community! And Alex Roytman demonstrated the power of RPG Open Access in his education sessions, as well as an invitation to speak at the IT Executive conference roundtable on IBM i application modernization. 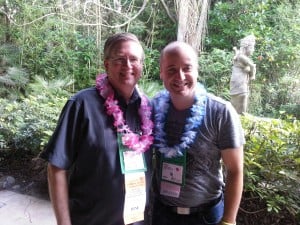 Steve Will and Alex Roytman at the COMMON 2014 Closing Ceremonies

We also made a big announcement at the conference - Profound UI 5.0 is coming! The next release of our modernization suite will give businesses the power to expand the scope of their IBM i modernization projects while simplifying development efforts. Version 5.0 offers new display file options that streamline the maintenance of green-screens alongside Rich applications, enable stateless application development and empower developers to tackle requirements that involve AJAX, XML, CSV and the use of 3rd party development frameworks like Sencha.

"Now, with Profound UI 5.0, instead of using complex API to integrate with these technologies, developers can use standard RPG and RPG Open Access," states Profound's CEO Alex Roytman. You can read the rest of the press release for this announcement here. 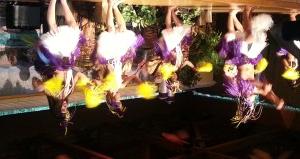 Hula dancers heat up the night at COMMON 2014 in Orlando, FL

To top of the festivities at COMMON 2014, attendees were treated to a traditional luau and a truly fiery performance by a Polynesian dance troupe. You couldn't have asked for a better end to the conference! We're looking forward to next year's event in Anaheim, California. You can find more information about that event at: www.common.org.